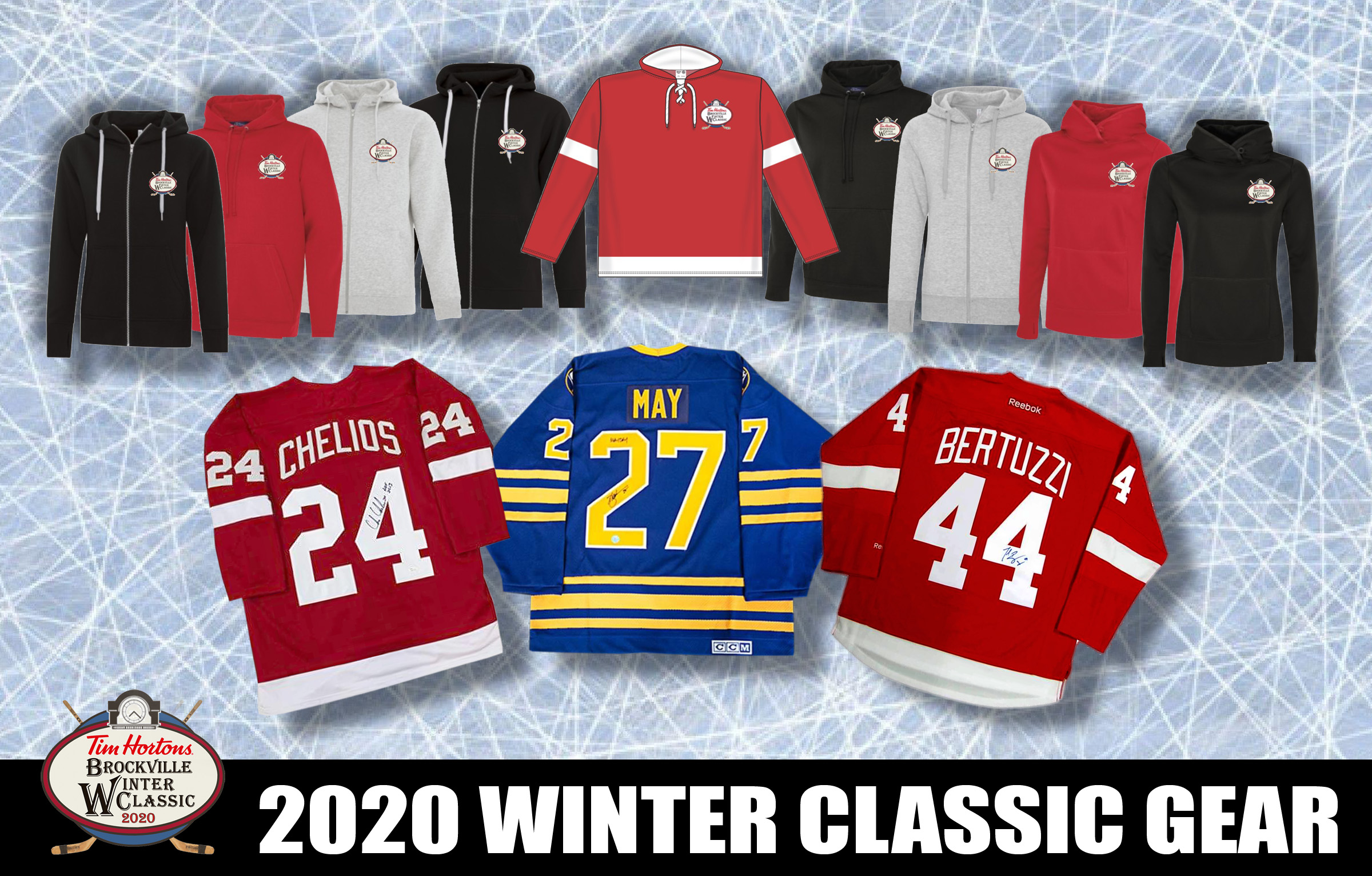 To order your very own BWC GEAR visit: https://forms.gle/NSuwTwxEq2LoVPCFA

The Heroes of Motown roster has been announced.

Hockey Hall of Famer Chris Chelios headlines the Detroit Red Wings alumni who have agreed to attend the 2020 edition of the Brockville Winter Classic. The annual hockey celebration weekend that raises money for Rotary Park features an exhibition game involving the alumni of an Original Six NHL team as well as the local Tim Hortons all-stars squad. The 2020 game will be held at the Memorial Centre on Sunday, Feb. 16.

Also on the Detroit roster that was announced on Monday are four-time Stanley Cup winner Darren McCarty as well as Todd Bertuzzi, Brad Marsh, Brad May and Brockville-area natives Randy Ladouceur and Todd Gill. Al Iafrate and Wayne Presley will also suit up with the Red Wings alumni; their NHL careers did not include Detroit, but both are from the Detroit area and have appeared at the Winter Classic.

Landing Chelios is “great” for the organizing committee, Severson noted. He will be the fourth Hall of Famer to take part in the Brockville hockey celebration; the others are Guy Carbonneau, Ray Bourque and Denis Savard, who was part of the Chicago alumni who visited the city earlier this year.

“That’s pretty special,” Severson said of being able to bring hockey legends to Brockville and giving local residents an opportunity to meet them.

Chelios won two Stanley Cups during his decade as a player with Detroit. He started his NHL career with Montreal and was part of the cup-winning Canadiens team in 1986. Chelios was traded to Chicago in 1990 and played for the Blackhawks until he was traded to the Red Wings late in the 98/99 season. He retired at the age of 47.

Severson, a Montreal fan, recalled that his sister bought a Chelios jersey when they went to a Canadiens game when they were kids. It’s “awesome” that followers of Montreal, Detroit and Chicago will have a chance to see him in person in February.

Having two local alumni players in Gill and Ladouceur is also a plus for the classic, according to Severson. Ladouceur was with Detroit for three-plus seasons in the early and mid-’80s before going to the Hartford Whalers; Gill played for the Red Wings in the late ’90s and early 2000s near the end of his lengthy pro career.

The Winter Classic includes a hot stove gala with the alumni crew in the Memorial Centre community hall the night before the exhibition game. In addition to general admission tickets to the alumni game, there will also be dressing room passes that provide special access to the former NHL players during the first intermission.

This is the Winter Classic’s sixth year, and the fifth that features an NHL alumni team. Toronto is the remaining original six team; it will be featured in 2021.

The 2019 classic raised $58,000 for Rotary Park. Severson encourages local residents to visit the facility located at the west end of downtown Brockville and see for themselves how far the park enhancement project has progressed.

For tickets and more information about the upcoming hockey celebration, visit brockvillewinterclassic.com.

NEW THIS YEAR:
Follow the flow from Prohibition on the Chicago River, to the banks of the mighty St. Lawrence!
Join the revered Chicago Blackhawks Alumni as we revisit the Glory Days during our 2019 "Speak Easy"-style fundraiser in support of the Brockville Winter Classic.
Delightful appetizers from the Windy City will be served, along with an amazing dinner catered byThe Keystorm Pub. This can't-miss event takes place SATURDAY February 16. 7:30pm start time at the Brockville Memorial Centre, with each ticket cost $150
**included with the cost is ONE general admission ticket to Sunday's alumni game!
** Hot Stove event is 19+
Get your tickets at: https://1000islands.snapd.com/events/view/1210208
Posted by chris_hum@hotmail.com @ 01:41 am
Share
Comments
Login to post comments.

It's not too late to meet some NHL LEGENDS TONIGHT in BROCKVILLE!

Get your tickets for tonight's NHL Legends Meet & Greet at The Keystorm Pub at  http://bit.ly/2r5u8hi or pick one up at the door! IT'S NOT TOO LATE! See you tonight with Ray :) 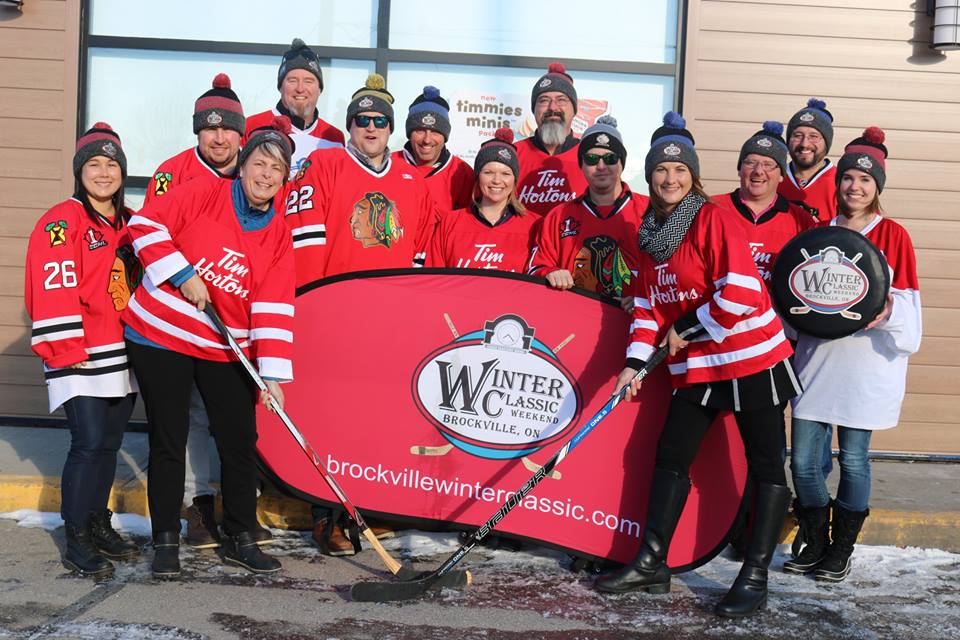 Funds raised during the Winter Classic will continue to be directed at Brockville Rotary Park. The Park is a locally funded facility that offers free recreation for the entire community. This facility is integral to the healthy upbringing of our youth by offering play without charge. Since 2010, the Rotary Park Revitalization Committee has infused approximately $2,000,000 into this community asset and couldn’t have done it without the support of the Winter Classic team and you the community at large.

How you can get involved:
▪ Sponsor
▪ Volunteer
▪ Participate in the many events over Winter Classic Week
▪ Donate! Both cash and in-kind donations are appreciated.
▪ Purchase tickets to the Saturday Night Hot Stove
▪ Purchase tickets to the Alumni Game
If you wish to be involved in this weekend, or have any questions, please contact brockvillewinterclassic@gmail.com or facebook.com/BrockvilleWinterClassic 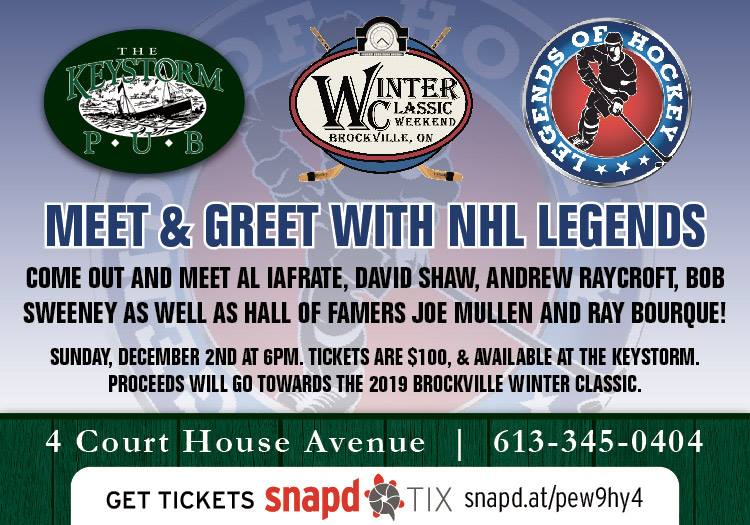 On Sunday December 2nd you'll have the chance to hear stories from NHL Hall of Famers Joe Mullen and Raymond Bourque. But it doesn't stop there as the stories keep on coming from David Shaw, Andrew Raycroft, Bob "swoop" Sweeney and a player who loves Brockvegas so much he's thinking of buying a second home here...none other than big Al Iafrate. This meet and greet will allow you to rub shoulders with some of your favorites from yester-years so get your tickets here:

The Brockville Winter Classic organizing committee held a wrap-up celebration last evening at the Keystorm Pub. It was announced that this year's event - which featured the New York Rangers Alumni squaring off against the local Canadian Tire All-Stars raised $34,821! This money will go towards additional improvements at Rotary Park. As well, Thelma Spicer was awarded Volunteer of the Year. The award was presented by the 2017 award winner Joe Boisvenue.

Two other important announcements were made last evening:

1 - For the next few years, employees at Procter & Gamble will be stepping up to help with the Rotary Park fundraising efforts with the goal to leave a lasting legacy on our City.

2 - The Brockville Winter Classic is a six year project that features an Original Six Alumni team each year. So far, we've had the Montreal Canadiens Alumni, Boston Bruins Alumni & this year, the New York Rangers Alumni. Next year our guests will be the Chicago Blackhawks alumni (yippee!) Next years Brockville Winter Classic Weekend will take place on Family Day Weekend in February 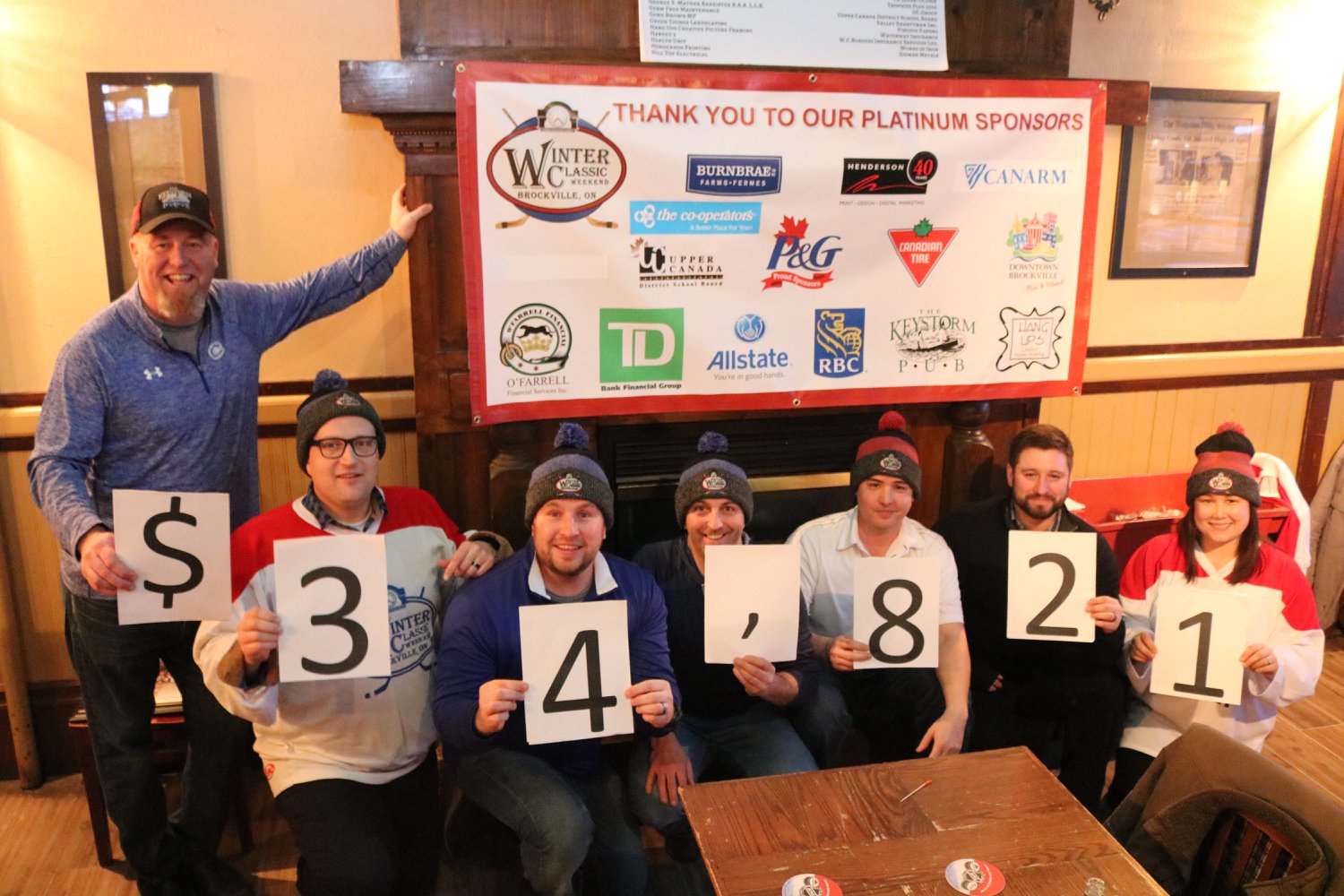 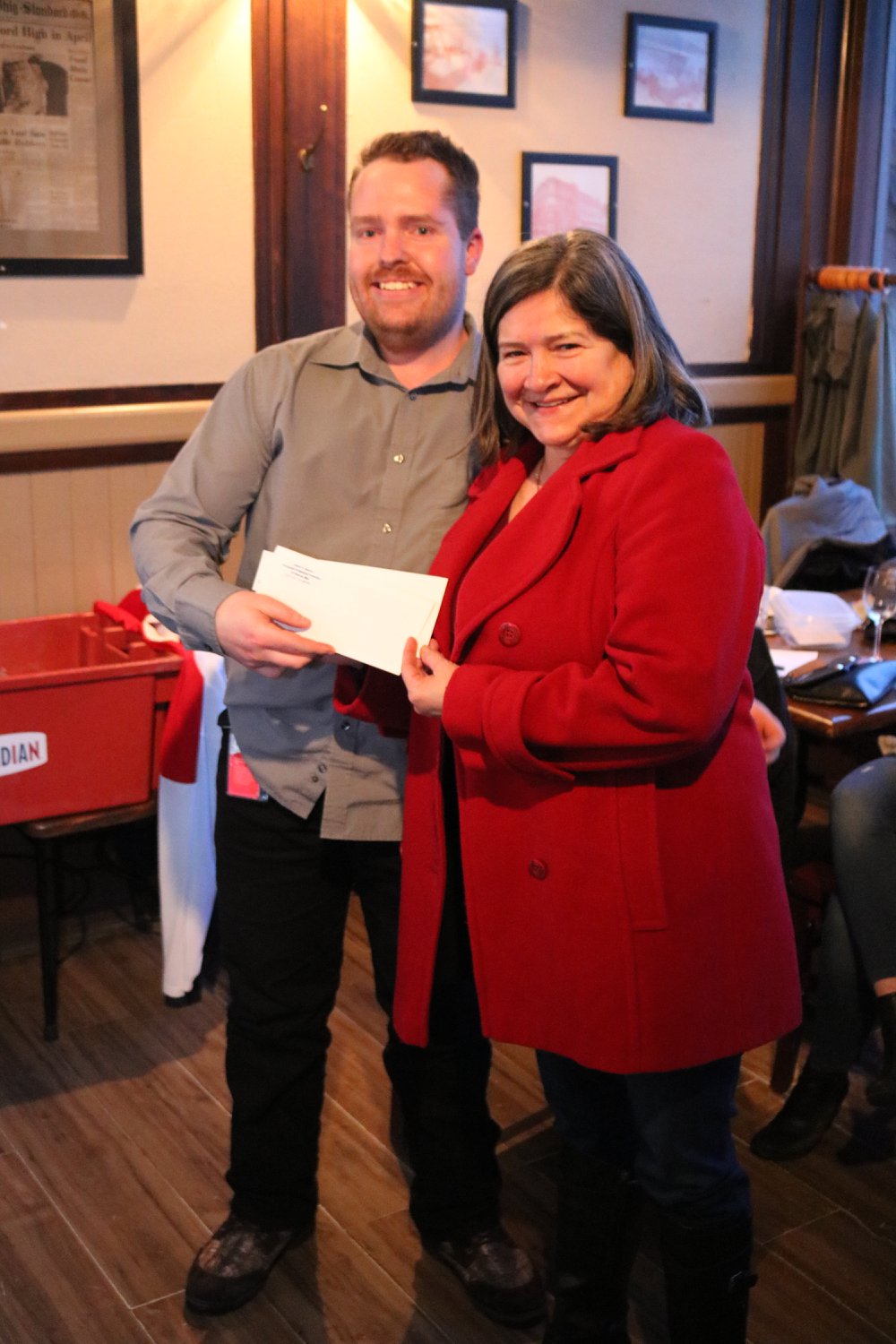 Check out the event schedule!

Lots of exciting events happening from February 10th & over the Family Day Weekend!

The Brockville Braves/Brockville Braves have accepted the Smiths Falls Peewee Bears challenge too! The Braves play vs the Lumber Kings on Friday, February 9th. A classic rival. A huge game. Every game played now has major playoff implications. The Braves are fighting to finish in third place to secure home ice first round! Make it down to the Madhouse and cheer on your local hockey team. Also bring non-perishable food items to the game! They accept the challenge!!!! WHO ELSE is up for the challenge???!